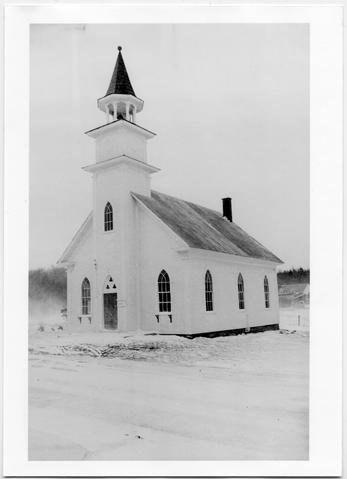 Way's Mills Union Church is under the jurisdiction of the Quebec and Sherbrooke Presbytery of the Montreal and Ottawa Conference of the United Church of Canada. The Church is governed by the Board of Trustees, the Official Board, the Board of Stewards, and the Congregation in cooperation with organizations within the Church, such as Sunday School and the United Church Women.

The fonds contains source material on Church management, the congregation's affairs, the Sunday School, and the United Church Women for the Way's Mill Union Church from 1881 to 2000. It also provides information on the Ayer's Cliff-Magog Pastoral Charge from 1976 to 1979. It consists mainly of minutes, account books, annual reports, attendance record, historical sketches, photographs, and press clippings. The fonds is comprised of the following series: Church Boards (1881-1982), Financial Resources (1967-1974), Annual Reports (1962-1979), Historical (1952-1990), Organizations (1918-1994), and Photographs ([1974?]).

The documents were loaned in 1993 by the Montreal and Ottawa Conference of the United Church of Canada.

The archives of the Quebec and Sherbrooke Presbytery local churches and pastoral charges are all arranged according to a common classification system established by Susan Stanley, former Montreal and Ottawa Conference Archivist.

Researchers may also consult the Barnston Methodist Church fonds (UC048) which includes minutes of the Board of Trustees of Way's Mills Union Church from 23 May 1938 to 1 January 1982.

Pictured is the church between 1935 to 1942.
New material processed and added to the fonds by Justin Gobeil, Archives Technician, in 2021.