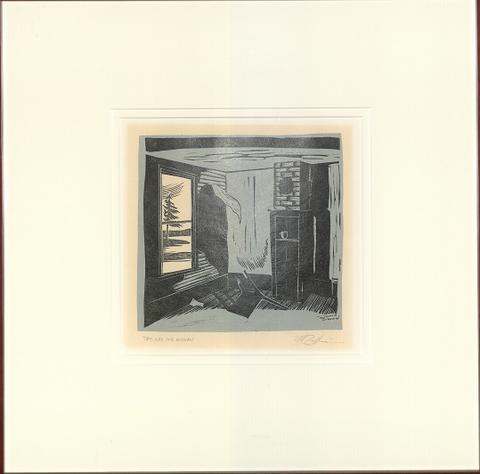 This was the Kitchen

William H. Cripps (known as Bill) was born in Montréal in 1907. He spent his early years in Ontario before moving to the Eastern Townships, Québec. After four years in the Canadian Air Force during the WW II, he returned to Ulverton, north of Richmond. From there he made his daily commute to Drummondville, where he was art director for Dennison, manufacturer of such paper products as doilies and Christmas decorations. He spent several years creating black and white lino-cut illustrations for the "The Stanstead Journal" before moving to North Hatley. In 1967 his daughter attended classses at Bishop's. It was at this time he became interested in helping develop an art collection at Bishop's. He felt that "a good college should have good pictures on the walls-not an art gallery...but good paintings, wood cuts, prints , etchings, on the walls of the common room, the study areas, the library, the reception halls - so that in living with them for four years, a taste for excellence would be formed... ". He demonstrated his keen interest by donating some of his own work and some works he had collected. Bill Cripps died in 1988.