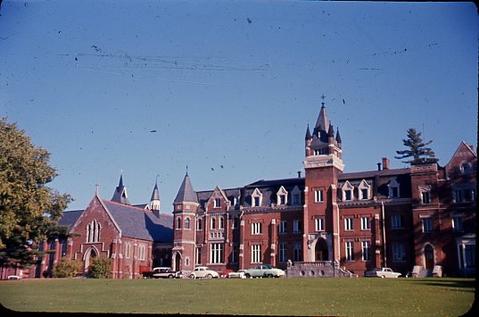 Ted (Allan Edward) Rafuse was born January 2, 1944 in Ottawa. His mother was a nurse and his father a bank manager. In his youth the family moved frequently in Ontario, Maxville, Cobourg, Haileybury and Toronto. Cobourg made the most impression upon him educationally as he attended Cobourg District Collegiate Institute East but actually graduated from Haileybury High School in 1963. Hearing of Bishop's and its small enrollment at the time, 600, he commenced University studies there in the fall of 1963. He majored in History and Political Science and graduated in 1967. In addition to that momentous event, he married and commenced to teach history at CDCI East. Five years later he was appointed Head of History. He and a colleague developed a local history program that was received well by both students and parents, but not so much by the notables of the Ministry of Education. In 1983 he and his wife separated and divorced.

For his own development he attended Queen’s University as a part-time student and was awarded a Master of Education degree in 1986. That same year he transferred to Port Hope High School as a Vice-Principal. In 1991 he married a second time to Susan and remains married to her. In the same year he was transferred to Courtice Secondary School remaining there until 1996. In that year he transferred to Brookside Secondary School in Cobourg. This assignment was unusual as the local Board of Education contracted with the Ministry of Corrections to provide education opportunities for Young Defenders, ages 16-17. Brookside was one of 4 such institutions in the Province and required communication and cooperation between the education, correction and social service agencies of the Province. Not public education per se, but an interesting assignment which serviced adolescents incarcerated from petty theft to murder convictions. Ted retired in 2001 from his professional education career. Through Susan’s daughter he has two grandsons, both of whom have given him much life in retirement. He frequently meets and converses with many former students be they from the classroom connection or from his vice-principal’s position.

Throughout his life he has held an interest in railways and model railroading. He has researched, written and self-published several books, Coal to Canada: A History of the Ontario Car Ferry Company, Wooden Cars on Steel Rails: The Crossen Car Companies of Cobourg, Ontario, A Railway to the Isle: A History of the Strait of Canso Railway Car Ferries, and Rails across the River: A History of the Rail Car Ferry Service on the St. Lawrence River Between Prescott, Ontario & Ogdensburg New York. He has constructed several model railway layouts and continues to model and research and write, primarily focusing upon local Cobourg and area railway history. www.steampowerpublishing.org