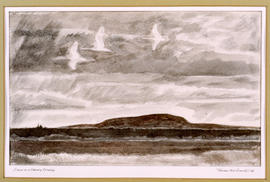 Swans on a Showery Evening

"Thoreau MacDonald, illustrator, designer, painter (born at Toronto, 21 April 1901; died at Toronto 30 May 1989) was self-taught but worked with his father, J.E. H. MacDonald (1873-1932). Colour blindness forced him to work mainly in black and white. His illustrations, particularly for the Ryerson Press and magazine Canadian Forum, typified a whole period of Canadian Illustration in the 1920s and 1930s. Certain technical mannerisms characterized his work; skies are a series of parallel horizontal lines; clouds are simplified ameboid shapes and trees look like skeletons of conch shells; and his animals recall the art of the ancient Near East, appearing full face or usually, in profile. In general, his subjects recalled his father’s but favoured Ontario farmland. He was one of the first artists in Canada to study factories and construction, but his work is most memorable for his delight in nature."
Source: Thoreau MacDonald the Canadian Encyclopedia https://www.thecanadianencyclopedia.ca/en/article/thoreau-macdonald