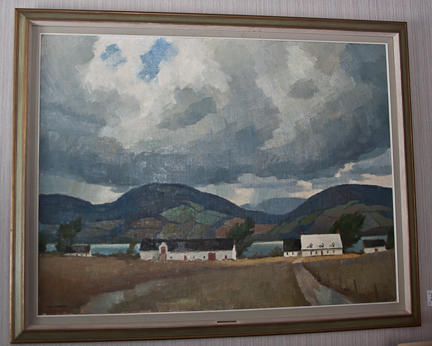 Tom Roberts was born in Toronto to an artistic family (his mother studied under J.W.L. Forster and his father was proprietor of the Roberts Gallery). He studied at the Central Technical School, Toronto, for three years (graduated 1929) under Haworth, Goldhammer, and Schaeffer. He studied for a year at the Ontario Collge of Art under Beatty, Housser and Haines. He began to work as a professional artist from 1928 onwards. Rous & Mann Ltd., Coutts Ltd., and A.S. Fysche Com. (Montreal) published Christmas cards of landscapes he painted. During World War II he served with the Royal Canadian Engineers [1942-43] and in his spare time made pencil and watercolor sketches of army life. In 1949 Roberts won the Ralph, Clarke, Stone Award at the OSA. He exhibited extensively and showed with the OSA [1942-68], RCA, CNE and at numerous public and commercial galleries. He is represented in many public & private collections all across Canada. A painter in watercolour, oils, and acrylics, his landscapes, urban and country scenes depict Ontario, Quebec and the Maritimes. Tom Roberts lived and painted in Port Credit, Ontario until his death at the age of 89.