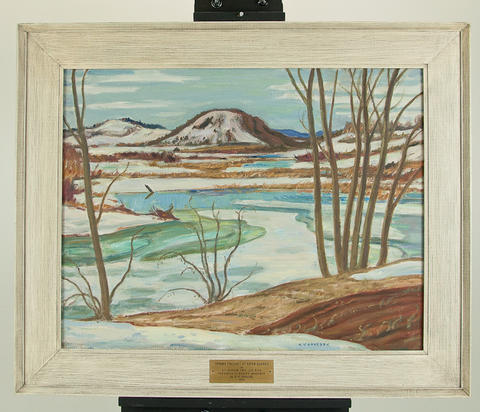 Ripon is a municipality in Papineau Regional County Municipality in the Outaouais region of western Québec, Canada, Anishinaabeg (Algonquin) traditional territory, located in the valley of the Petite-Nation River. The town was named after Ripon in North Yorkshire, England.

Born in 1882 in Montréal Quebec, A.Y. Jackson was a founding member of the Group of Seven and he was intrinsic to the development of the Canadian art aesthetic. Eventually working mainly in oil, he received his earliest artistic training in his hometown of Montréal when he went to work for lithography company at age of 12.
He began his formal studies in 1902, first working under William Brymner (1855-1925) at the Art Association of Montréal, and later at the Chicago Art Institute from 1905 to 1907. Immediately following his education in North America, Jackson traveled to Paris to study under Jean Paul Laurens (1838-1921) at the Académie Julian where he was heavily influenced by Impressionism. Subsequent to his studies, he traveled and painted England, France and Italy, and returned to Québec in 1914.
With their focus on capturing the Canadian landscape, the paintings that Jackson produced upon his return attracted the attention of fellow artist J.E. H. MacDonald (1873-1932) and Lawren Harris (1885-1970). They eventually convinced Jackson to move to Toronto, where he shared a studio with Tom Thomson (1877-1917) and become involved in all major group trips to Algonquin Park, Georgian Bay, Algoma and the North Shore.
Jackson exhibited with the Group of Seven throughout the 1920s. He also made regular sketching trips to Québec in the spring, travelled to regions such as the Canadian Artic in the summer and returned to the studio in Toronto to paint his canvases.
With a career that remained active into his eighties, Jackson exhibited with the Royal Canadian Academy of Arts from 1904- 1957 and with the Art Association of Montreal from 1903 to 1946. He died in Kleinberg, Ontario in 1974.
Source: Heffel.com, Canada’s National Fine Art Auction House 30/11/2008

This item " Spring Freshet at Ripon" was commissioned especially for Bishop's University through the generosity of Mr. R.P. Brouse.