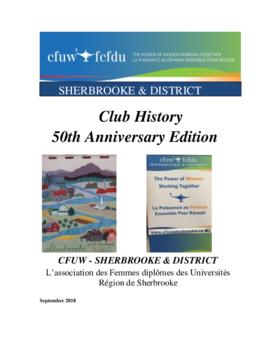 The Sherbrooke and District University Women's Club received its charter in 1968 from the Canadian Federation of University Women, though meetings and activities had been taking place since 1965 under the supervision of Lorraine Codère, Enid Hopper, and Van Cornwall-Jones. The Club pursues the same objectives as the Canadian Federation: to promote co-operation among women university graduates, to arouse and sustain among members an intelligent interest in public affairs and education; to guard and improve the economic, legal and professional status of women; to initiate community action in the field of education; to participate in the work of the Canadian and international Federations of University Women. The Sherbrooke and District University Women's Club is part of the Provincial Council of Quebec of University Women's Clubs and of the Canadian Federation of University Women. The Club is administered by its Executive Committee, elected by members at the annual meeting. Committees are formed according to members' interests (Book Club, Social and Political Action Group, Gourmet Group, Physical Fitness Group, and so on). The Club organizes different activities for members (e.g.: lectures, cultural events, conferences, etc..) and the public (book fairs, public-speaking contests, essay contests, and others). As well, it sponsors prizes and bursaries for students attending the region's educational institutions.

Title based on contents of fonds.
Among the photographs, there are 12 negatives.
The documents were donated in eight accessions (1988-2008) by the Sherbrooke and District University Women's Club.
The series 'Correspondence' is not organized chronologically.
The documents are in English and in French.