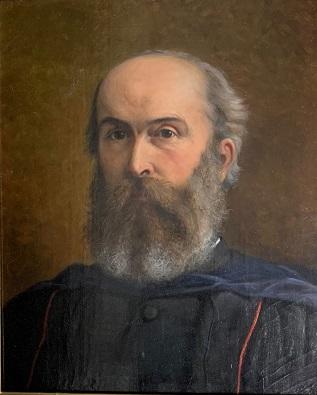 Charlotte Mount Brock Schreiber (née Morrell) was born in May 1834 in Colchester, England. She studied at Carey's School of Art ( London) between 1850 and 1855. She also took lessons with John Rogers Herbert and instruction in anatomy from a Mr. Scharf. In addition to exhibiting with the Royal Academy of Arts between 1855 and 1875, Charlotte illustrated edition of Edmund Spenser's "The Legend of the Knight of the Red Crosse", (London, 1871) and Elizabeth Barrett's Browning's "The rhyme of the Duchess May" (London 1873).
In 1875, newly married to her second cousin, Weymouth Schreiber of Toronto, Canada, who had three teenaged children, she immigrated to Ontario , locating in Deer Park (Toronto). Within five years Schreiber's talent was recognized and she attained a notable position in the province's artistic community. In 1876 she was elected to the Ontario Society of Artists; the following year she was the only woman on the board of the Ontario School of Art and from 1877 to 1880, its sole woman teacher. She was the first female member of the Royal Canadian Academy of Arts, having been appointed at its founding in 1880. In 1888 she chose to retire rather than resign over its prohibition of women attending meetings.
In the 1890s personal reasons encouraged her to return to England, where she continued to enjoy a prosperous career, painting until her death at the age of 88.