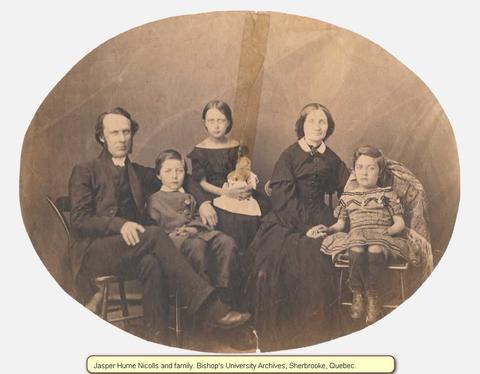 The Nicolls and Mountain families lived in Quebec and Lennoxville in the nineteenth century. The founders of the connection were George Jehoshaphat Mountain, a young Anglican clergyman, and Gustavus Nicolls, a Captain of Engineers. Mountain married Mary Hume Thomson, the daughter of a British official in Quebec in 1814. Nicolls married Mary Thomson's elder sister Heriot Frances, in 1812. Gustavus Nicolls became Commander of Royal Engineers in Canada, while Mountain became Bishop of Quebec. In 1845, Mountain appointed his nephew, Jasper Nicolls, the General's third son, as Principal of the newly established Anglican institution in Lennoxville, Bishop's College. Jasper fell in love with his cousin Harriet, the Bishop's daughter. They were married in Quebec in 1847. The correspondence which flowed between the Mountain family in Quebec and the Nicolls family in Lennoxville provided the basis for Ten Rings on the Oak, 1847-1856 by Donald C. Masters and Marjorie W. Masters.