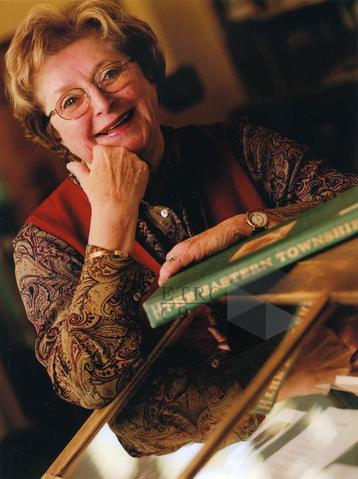 Monique Nadeau was born in Sherbrooke on 10 April 1929, the daughter of Joseph-Achille Nadeau (1880-1951) and Amanda (Annie) Gagnon (1892-1976). Her father, a watchmaker and goldsmith, had a store on King Street in Sherbrooke. She was educated at Mont-Notre-Dame in Sherbrooke from 1935 to 1946, which was followed by one year at the Institut Bilingue Lallier for a business course. Monique married Alphonse Saumier, a journalist for La Tribune and founder of the École de ballet de Sherbrooke, on the 29 May 1949 at the Saint-Michel Cathedral. Together they had four children: Alain (1950-), Marc (1952-), Anne-Marie (1957-), and Michèle (1961-).

In 1954, Monique worked at her father’s store, Skinner & Nadeau jewelers, and then in 1958, she moved with her family to Montreal until 1976, when they returned to Sherbrooke so that she could take on the management of the family store. She continued to manage the store until 1984, when she began her career as a contract faculty member in the Department of Fine Arts at Bishop’s University, a position which she occupied until 2002. From 1987 to 1995, Monique was also the executive director for the Eastern Townships Research Centre (ETRC). She left the ETRC for a position as the curator at the Musée de Beaux-arts de Sherbrooke. She also taught at the Université du troisième âge de l’Univesité de Sherbrooke from 2000 to 2008.

In 2002, Monique was the recipient of the La Tribune prize for an individual who contributed significantly to the dissemination of history of Sherbrooke and the Eastern Townships. She completed her doctorate in 2007, which was later published, titled Un espace et un lieu de culture: Le Art Building de Sherbrooke, 1887-1927. In 2010, she received the Mérite Estrien prize for her work in the fields of history and art. In addition to her varied and busy career, she served on numerous boards and committees for community organizations, participated in many conferences, and is the author of many articles and exhibition catalogues. In 2013, Monique was the recipient of an honourary doctorate from Bishop’s University for her contributions throughout her long career.

The fonds contains information on the professional life of Monique Nadeau from 1983 to 2017. It consists of articles, reports, correspondence, prizes, research works, and photographs. It is comprised of the following series: Professional life, Honours and acheivements, Publications and writings, Education, Personal life, and Photographs.

The fonds was donated by Monique Nadeau in 2019.