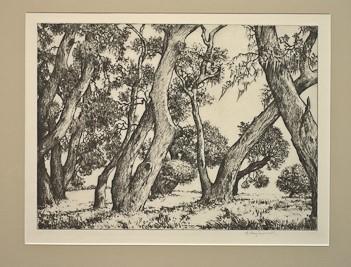 Alfred Ray Burrell was born in Oakland, California in 1877. He studied in San-Francisco at the Partington Art School and Mark Hopkins Institute (1898) and in New York City with William Merritt Chase and Frank DuMond. Upon his return he studied engineering at University of California at Berkeley and worked for ten years with his father in the contracting and heavy construction business. Yielding to the desire to work as an artist, he then returned to New York City where he worked as an illustrator, taught at the Art Students' League and was head of the art department at A.W. Shaw Publishing Company until 1919.
Burrell then spent four years as a member of the faculty at the Hawaiian School of Design in Honolulu. Returning to San Francisco, he continued teaching at the California College of Arts and Crafts and assisted Frank Van Sloun in painting the murals in Bohemian club and in the rotunda of the Palace of Fine Arts (1936). Burrell was prominent in the art world of San-Francisco contributing greatly as a teacher and exhibiting locally until his death on 1952.