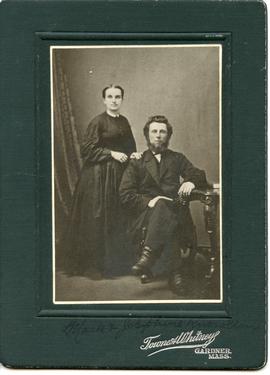 Several members of this family were early settlers in the Township of Brome, coming from Newfane in the State of Vermont. The first was Silas. Knowlton, who moved to Crown land in the Township of Stukely in 1796, some years before the Patent for this Township was issued. He was the son of Hon. Luke Knowlton and his wife Sarah Holland, of Newfane, Vt. Silas Knowlton married Sally Holbrook, by whom he had four children: Paul Holland, Luke, Samuel and Samantha.

When he settled on his land, conditions were very primitive, with no schools, so the eldest son, Paul Holland, returned to the home of his grandfather at Newfane, where he remained for some years acquiring an education and the homespun philosophy of the Green Mountain State. He remained there until he was twenty years of age when he married Laura Moss, a school teacher from Bridport, Vt., and in 1815 he returned to Canada. He purchased property on the shore of Brome Lake, now known as the village of Knowlton, named after this family.

Paul Holland Knowlton acquired extensive holdings in the County of Brome. He was a leader in local progress in the matter of church and school, and the founder and first President of the Agricultural Society. In 1827 he was elected Member of the Legislative Assembly, later being appointed to the Legislative Council where he served until his death, August 28, 1863. His widow, Laura, died April 12, 1868.