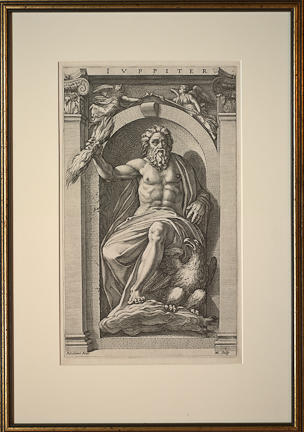 Jupiter, also called Jove, Latin Iuppiter, Iovis, or Diespiter, was the chief ancient Roman and Italian god. Like Zeus, the Greek god with whom he is etymologically identical (root diu, “bright”), Jupiter was a sky god. https://www.britannica.com/topic/Jupiter-Roman-god

Hendrick Goltzius was a Dutch artist born in Muhlbracht, The Netherlands in 1558. Goltzius arrived in Haarlem at age nineteen. Two years later, he married a rich widow who helped him set up a workshop. He left Haarlem only once to visit Germany and Italy in 1590 to 1591, bringing home a more classical, naturalistic art that shifted Dutch artists away from the eccentric Mannerist style. His panoramic, open-air drawings of Holland's scenery, among the earliest Dutch landscapes, paved the way for younger artists like Rembrandt van Rijn.
Famous for his printmaking, Goltzius worked in secret and never showed an unfinished work. By 1600 he had abandoned the burin for the brush. His eyesight was failing due to years of painstaking work with engraving tools, and, like his contemporaries, he believed painting to be superior to printmaking. He died in 1617 in Haarlem, Netherlands, never achieving the same quality on panel as he had on paper.