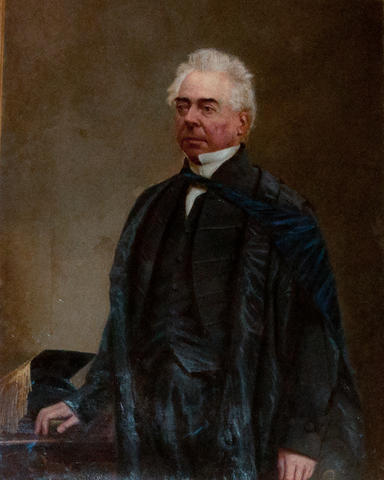 William Notman was a photographer and businessperson who was born in 1826 in Paisley, Scotland and died in Montreal in 1891. John Arthur Fraser was an artist and businessperson who was born in 1838 in London, England and died in 12898 in New York City. In 1860, Mr. Fraser was engaged as an artist by the Montreal firm of William Notman, not only to tint portrait photographs but also to head the newly formed Art Department.
Excerpted from Dictionary of Canadian Biography, Dennis Reid

Signed by the photographer William Notman and the painter John Fraser, the portrait of Chancellor McCord is an early example of a complex procedure in which a photographic print was used as a basis for an oil portrait. This manipulation of the photographic image to produce a more faithful likeness was very appreciated by the sitters who commissioned such works in the middle of the 19th century.
Excerpted from 1991 letter to Principal Scott by Lise Nadeau, Musée du Québec, Archiviste,