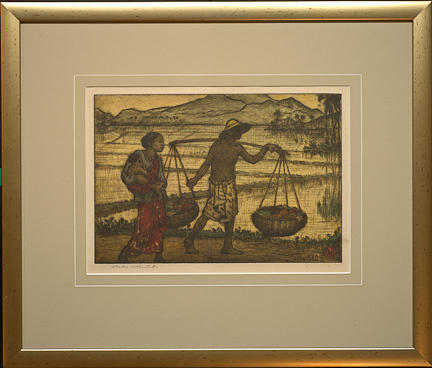 Charles Bartlett was born in England in 1860. He began his education with the intention of becoming a chemist, but switched to fine art, enrolling at the Academy of Art in London at the age of twenty-three. From there he went to Paris to further his studies at the Academie Julian. After he lost his wife and infant son in childbirth, the artist spent a year traveling in Europe with fellow artist Frank Brangwyn. It was at this time that his work maintained a focus on the daily lives of peasant women and children, and began to hone his watercolor and drawing techniques. It wouldn't be until much later that Bartlett, now returned to England and remarried, would discover his love of printmaking and the landscape subject matter he would become known for.
In 1913 he and his wife traveled to Ceylon, Indonesia, and China to sketch and paint. 1915 hailed their arrival in Japan, where they met Austrian artist Fritz Capelari who introduced them to publisher Watanabe Shozaburo. Watanabe and Bartlett began a long collaboration in which Watanabe would turn the watercolor landscapes of Bartlett's into color woodcuts; soon, Bartlett himself would use Watanabe's studio to carve and create his own woodblocks.
In 1917, the Bartlett's traveled to Hawaii, intending to make a short visit. However, they fell in love with the landscape and community where they were visiting, and soon established their lives and Charles' career there. He became a co-founder of the Honolulu Print-makers and a prominent member of Hawaii's artistic community until his death in 1940 at the age of eighty.