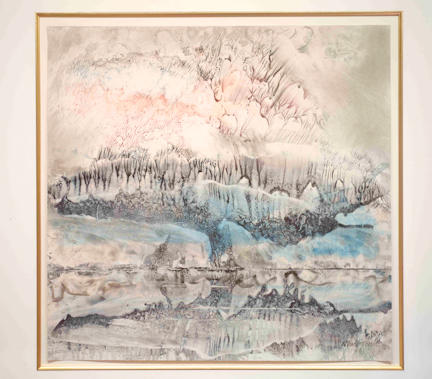 Louis Muhlstock was born in Narajow, Galicia, (near Poland). In 1911 he made his way to Canada when he and his family joined his father who had immigrated to Montréal in 1908. As a teenager, he studied drawing at the Monument National Conseil des Arts and Manufactures under the guidance of Edmond Dyonnet (1859-1954) and Joseph Saint-Charles (1868-1956). He then joined the Art Association of Montréal from 1920 to 1928 attending evening classes with William Brymner (1855-1925). In 1926 he also attended classes at the École des Beaux Arts de Montréal. In 1928 he had finally saved enough money to go to Paris, France and it was there that he studied with Louis-François Bilhoul (1874-1947). Quote “It is with Bilhoul that I really started to paint. He was a very fine sincere painter, in the tradition of the old masters.”
Muhlstock continued to paint, make prints and draw throughout his long lifetime. He died in Montréal in 2001.
Excerpted from Louis Muhlstock; A Biography by Monique Nadeau-Saumier from Louis Muhlstock: New Themes and Variations 1980-1985 Concordia
Art Gallery, Concordia University, Montréal, 1986.