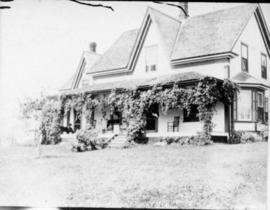 The photograph shows the Reed house in Reedsville (aka Reed's Crossing)/North Hatley, situated on Capelton Road, from around 1905. 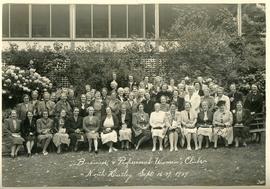 Part of Business and Professional Women's Club of Sherbrooke fonds

The item is a photograph of the women in attendance at the regional convention of the Business and Professional Women's Clubs in North Hatley on 16 and 17 September 1939. Photograph probably taken in front of Pleasant View Hotel. 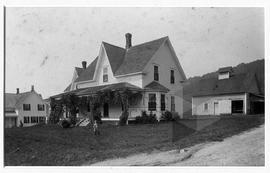 The item contains information on the personal lives of the Reed family in the 1910s. It depicts Reedsville.

King Edward Lodge, No. 78, Freemasons (North Hatley) and others

The fonds consists of source material relating to the history, administration, finances committees, membership, matches, bonspeils, events, and special activities of the Lennoxville Curling Club from 1923 to 1999. It also consists of source material on curling and other curling clubs. The fonds contains minutes, reports, lists, photographs, press clippings, booklets and artefacts. The fonds is comprised of the following series: Administration ([19--?]-1998), Committees (1923-1999), Events and Special Activities (1949-1999), Curling Information (1946-1999), Miscellaneous ([19--]-1999), and Ladies' (1992-1998).

The file contains source material on the lives and experiences of Eastern Townships Women during World War II. It consists of recorded oral history interviews, interview transcriptions and research material. Included in the research material are photocopies of newspaper clippings, advertisements, a Red Cross publication titled "Knitting instructions for War Work" dated 1940 and photocopies of the minute book and list of members for the Officers' Wives Association of the Sherbrooke Fusilier Regiment, also known as the Women's Committee of the Sherbrooke Fusilier Regiment and the Women's Committee of the 27th Canadian Armoured Regiment, dated from 1940 to 1945. The file is comprised of the following series: Project Description, Administration and Results (1991-1995) Interviews (1991), and Research Material (1940-[1945], 1991). 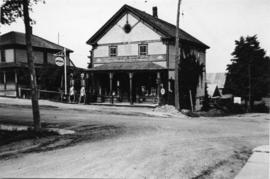 Item is a photograph of John McCammon's General Store in Inverness, probably taken in the late 1930s. 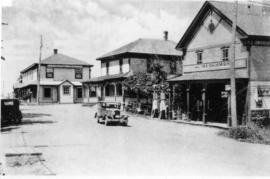 Item is a photograph of the John McCammon General Store in Inverness, probably in the late 1930s. 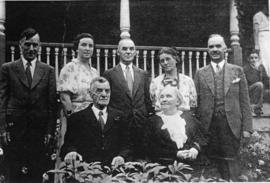 Item is a photograph of John McCammon's family in the late 1930s.

The series consists of photographs of Pettes family members, including two photo albums from the Pettes-Sweet and Pettes-Brown families, loose and framed photographs relating to Jeremiah and Nathaniel Pettes' families.

The sub-series contains photographs of Proper family members, sons and daughters of Peter Benjamin Proper and Sara Traver, and their descendants.

The fonds consists of primary and secondary source information regarding the Mills family.

The file contains photographs of members of the Mills family. 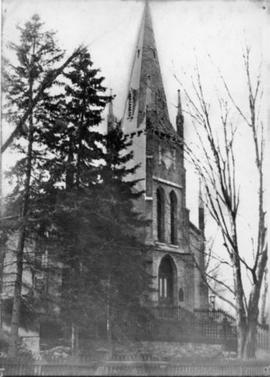 Item is a photograph of St. Peter's Church on Dufferin Street in Sherbrooke. The church was erected in 1844 and demolished around 1900. 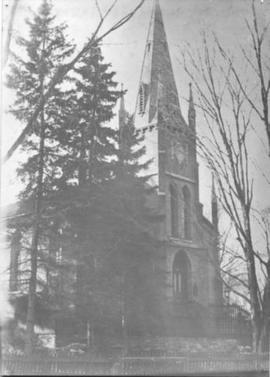 Item is a photograph St. Peter's Anglican Church on Dufferin Street in Sherbrooke. The church was erected in 1844 and demolished around 1900. 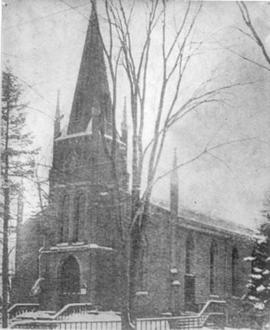 Item is a photograph of St. Peter's Church on Dufferin Street in Sherbrooke during winter. The church was erected in 1844 and demolished around 1900. 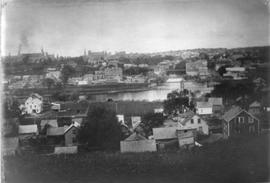 Item is a photograph from 1883 with a view of several buildings (houses, churches, etc.) at the confluence of the Magog and St. Francis Rivers in Sherbrooke.

The fonds contains source material on the history and congregation's affairs of the Presbyterian church in Gould, known first as Chalmers Presbyterian Church (1845-1925) and then as Emanuel Presbyterian Church (1925-1949). It consists of minutes, annual reports, orders of service, a communion roll, a newspaper clipping, and a register of baptisms, marriages and burials. The annual reports may also be of interest to research as they contain information on baptisms and deaths for each year. The fonds is comprised of the following series: Vital Statistics (1931-1946), Session (1931-1949), Congregation (1897-1928), Photographs (1920), and Miscellaneous Documents ([190-?]-[192-?]). 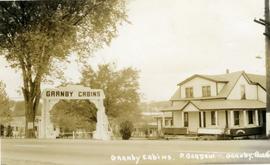 The item is a postcard of the Granby Cabins and it's sign on the side of the street. The photograph is signed P. Beauboin at the bottom right of the postcard.

The fonds consists of primary source documents relating to the Reverend John Jackson's installation on a land in Brome, where he was given a Clergy Reserve, along a river later named Jackson River. The documents relate to transactions and legal matters encountered by Rev. John Jackson. 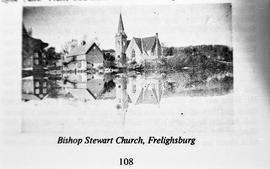 Item is a misidentified photograph that actually depicts the Knowlton Methodist Church and mill pond from around 1900. The image is laterally reversed.

The fonds contains source material on the organization and activities of the Eastern Townships Association of Teachers from 1966 to 1996; on the Association's positions on issues and legislation relating to education and working conditions for teachers in the Eastern Townships Protestant schools; and on its relations with local schools and school boards, and with the Provincial Association of Protestant Teachers. The fonds consists mainly of the Association's constitution, minutes, financial and accounting records, collective and local agreements, lists of members, delegates, and representatives, briefs, studies, procedural guides, and correspondence. The fonds is comprised of the following series: Administration and Management (1966-2001), Financial Resources (1975-1998), Membership (1966-1995), Working Relations (1969-2001), Association's Positions (1970-1989), Professional Development and Training Programmes (1969-1995), Educational Programmes (1981-1993), Human Resources (1923-2008), Bedford Association of Teachers (1966-2000), Bill 109 Education Reform (1996-2001), Appalachian Teachers' Association (2000-2001) and Miscellaneous (1985-2000).

The series contains primary source material on the history of four Eastern Township's towns including Ayer's Cliff, Hatley, Milby, and Ste-Catherine-de-Hatley/Katevale. It consists of research notes, published stories, and correspondence. The series is comprised of the following files; Ayer's Cliff (1909-1984), Hatley (1803-1949), Milby (1992), and Ste-Catherine-de-Hatley/Katevale (1981).
Included among the documents are: an index of burials in the Ayer's Flat Cemetery, the Ayer's Cliff section of the 1962 Telephone Directory, historical notes on Ayer's Cliff compiled by Lysle Thompson, notes on the Tyler/Old Pioneer Cemetery, a reproduction of the Hatley Story by Maude Gage Pellerin, a copy of a map of the settlers in Hatley Township in 1803, a copy of "The Milby Area and the One Room Schoolhouse" by Esther Barnett, and a copy of a history of Katevale / Sainte-Catherine-de-Hatley from 1981.

Landscapes of the Past

The file consists of photographs copied from private collections and historical societies in the area during a project conducted in 1977 and 1979 by the Eastern Townships Heritage Foundation titled "Landscapes of the Past".

Landscapes of the Past

The file consists of photographs copied from private collections and historical societies in the area during a project conducted in 1977 and 1979 by the Eastern Townships Heritage Foundation titled "Landscapes of the Past.".