File consists of one photograph of the frigate H.M.C.S. Coaticook from about 1944. 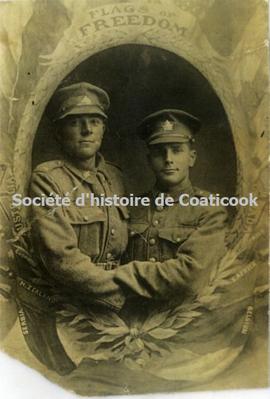 Item is a reproduced photograph of Osias Dupuis with an unidentified soldier in his military uniform from about 1918. Osias Dupuis enlisted with the 2nd Depot Battalion, 2nd Quebec Regiment and served in the Canadian Expeditionary Force during World War I. Later on, he became the first janitor of the Académie Sacre-Coeur in Coaticook in 1943.

File contains images of soldiers from the Coaticook area from about 1918. It consists of a reproduced photograph of two soldiers, one identified as Osias Dupuis (enlisted with the 2nd Depot Battalion, 2nd Quebec Regiment).

File presents information on men from the Coaticook area that served in the military from 1917 and 1969. It consists of a discharge certificate for Private John J. Forest, enlisted with the 5th Canadian Mounted Rifles, and a service certificate for Sergeant J.P. G.E. Géurin.