File illustrates the development of roads and the origins of their names in area of Baldwin Mills. It consists of annotated and hand-drawn maps, research documents and notes, correspondence, and notes on resolutions of the Municipality of Barnston’s town council.

The file contains primary and secondary source information on Henry Seth Taylor and his invention of the steam buggy in Stanstead in the 1860s, collected and created by Randy Piercey for the production of a podcast. It consists of research, interviews, photographs, and supporting recordings as well as a completed version of the podcast.

File presents Belding-Corticelli's opinion on the matter of the sale of the Town of Coaticook's hydroelectric power plant to Southern Canada Power in 1952. It consists of correspondence between the Coaticook office and the head office in Montreal.

The file contains a photograph of the steamship "Pocahontas" on Lake Massawippi, ca. 1910. 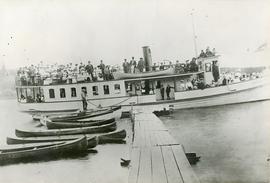 The file consists of a photograph of the steamer "Pocahontas" on Lake Massawippi around 1905, with a dock and canoes visible in the foreground.