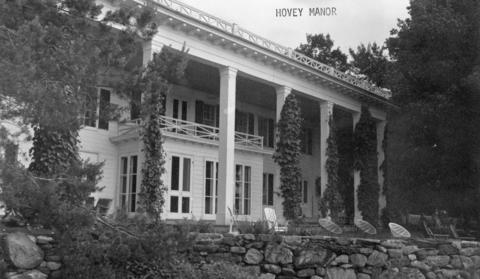 Title based on contents of item.

The property was built in 1900 by Henry Atkinson, who was the owner of Georgia Power in Atlanta. He called the house "The Birches" and would reside there during the summer. The current name "Hovey Manor" was given by Robert F. Brown, who bought the house in 1950. The house was built to resemble that of George Washington's, at Mount Vernon, Virginia.

Item is a photograph of Hovey Manor, located in North Hatley.

The photograph was donated by Jean-Marie Dubois in 2017.