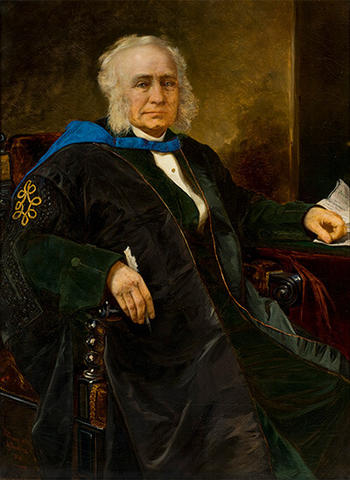 William Notman was a photographer and businessperson who was born in 1826 in Paisley, Scotland and died in Montreal in 1891. John Arthur Fraser was an artist and businessperson who was born in 1838 in London, England and died in 12898 in New York City. In 1860, Mr. Fraser was engaged as an artist by the Montreal firm of William Notman, not only to tint portrait photographs but also to head the newly formed Art Department. *

Henry Sandham (1842-1910) was born in Montreal in 1842. His father was a house painter by trade in the Griffintown neighbourhood of Montreal. Henry began to show great interest in art at an early age. By 1856, he had begun working in William Notman’s photography studio and by 1860; he was the assistant to William Notman’s partner, John Arthur Fraser, head of the studio art department. As there was no art school in Montreal at that time, Sandham acquired his training in drawing, watercolours and oil painting while on the job. He later developed his skill in human figure drawing by studying anatomy with a physician.

When Fraser left in 1868 to open the Toronto branch of Notman & Fraser, Sandham took his place as head of the art department. During the 1870s, he refined the technique of producing large composite photographs that the Notman studio are widely known for. Sandham was awarded a silver medal at the 1878 Exposition Universelle in Paris for a large scale, three-hundred-person group photo of the McGill Snow Shoe Club. He became partners with Notman in 1877 and the studio was renamed Notman & Sandham. This partnership lasted until 1882.

Sandham began creating illustrations for Scribner’s Monthly in 1877. The illustrations and series-drawings that he created over this three-year period eventually led to be named a charter member of the Royal Canadian Academy of Arts. He died in London, UK in 1910. **