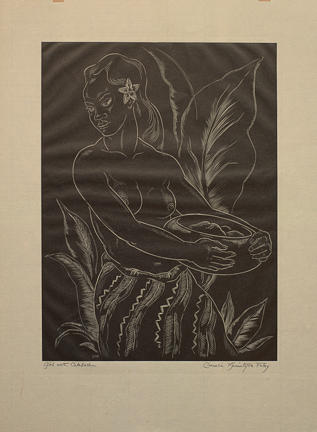 Cornelia MacIntyre Foley (1909-2010) was born in Honolulu, Hawaiʻi, began her art training under Huc-Mazelet Luquiens at the University of Hawaiʻi, continued at the University of Washington, and spent two years in London at the Slade School as a pupil of Henry Tonks. She returned to Honolulu in 1934, whereupon she befriended and studied under Madge Tennent. In 1937, she married Paul Foley, a lieutenant in the Navy. From 1937 to 1942, the couple lived in Long Beach, California, and Seattle, Washington. Her oils and acrylics include portraits and landscapes. Besides numerous exhibitions around the country, her artwork is held in public places such as the Honolulu Museum of Art, the National Print Collection at the Library of Congress, and the University of Hawaiʻi.
With an extraordinary mastery of figurative drawing, Foley was able to fuse the sensuous with the hypnotic in her unique views of the human essence. Her famous Hawaiian Woman in White Holoku (1937, Honolulu Academy of Arts) epitomizes the elements of her drawn and painted works, which continue to enchant and inspire viewers to this day. She died in 2010.