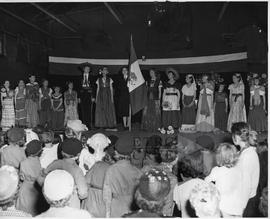 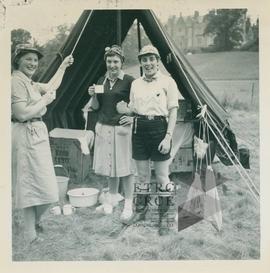 The Sherbrooke area's first Girl Guide Company was established in 1913. At that time, Canadian Girl Guide companies were under the authority of the International Girl Guides Association of the United Kingdom, the central organization of the international Guiding movement. In 1917, the Canadian Council of the Girl Guides Association was incorporated. In 1938, the Fédération des guides catholiques de la province de Québec joined the Canadian Council, which at the same time created the Quebec Council. The Sherbrooke Division came under that new council until the establishment of the Champlain Area, which included the Eastern Townships. Later, the Champlain Area became the Sangam Area. The by-laws of the national organization stipulate that the main objectives of all its sections are to enable girls 'to develop personal values and respect for self and others; to develop respect for nature and the order of things; to have new experiences and outdoor adventure; to make friends and have fun; to achieve a sense of well-being; to learn the importance of decision making; to function in small groups; to achieve a sense of pride in accomplishment; to acquire practical and leadership skills; to develop their ability and willingness to help'. Division commissioners are accountable to a higher level (regional, provincial, or national, during various eras) for their divisions' good administration. One of a commissioner's main tasks is to establish new districts and to supervise their operations. A given division is managed by a committee composed of the Commissioner, the Assistant Commissioner, the Secretary, the Treasurer, districts commissioners, committee presidents, and, optionally, local association representatives. This committee oversees the Division's operations through regular meetings. During the Girls Guide movement's early years, company management was the responsibility of local associations, composed of parents. After the establishment of the Sherbrooke Division in the 1930s, however, local associations became responsible for fund-raising, which became their primary purpose. Initially, the Sherbrooke Division comprised companies from the Sherbrooke and Magog areas, but since the dismantling of the Stanstead Division in 1964, it has also taken the Stanstead-area companies. The Sherbrooke Division created districts in the 1970s to distribute administrative work. The St. Francis District was formed in 1973, the Dufferin District in 1974, and the Newton District in 1975. Together, they account for all the Sherbrooke Division companies.

The fonds contains source material principally on the preparation and carrying out of activities organized by the Sherbrooke Division and its companies from the beginning of the Guiding movement to the 1990s. The materials relating to the first half of this period consist mainly of photographs, while those relating to the second half are mainly textual records (minutes, annual reports, financial reports, membership lists, and so on.) of the management and financing of the organizations, the training of participants, and social and recreational activities. Holdings also include documents on the activities of the local associations and companies, particularly those of Lennoxville, until the districts were created. Further, the series entitled 'History' is more closely related to the Lennoxville companies and their Local Association than to the Sherbrooke Division. The fonds is comprised of the following series: By-laws (1956-1984), History ([196-?]-[198-]), Executive Committee (1973-1981), General Meeting (1963-1993), Annual General Meeting (1948-1982) Committees (1952-1980), Members and Officers (1944-[197-?]), Photographs ([19--]-[197-?], Press Clippings ([19--]-1978), Correspondence (1932-1990), Local Groups and Associations (1937-1978), and Miscellaneous Documents ([1956?]-1979).