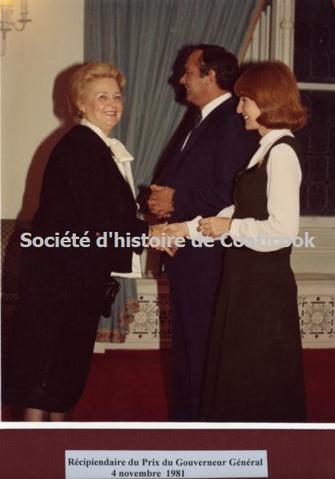 Yvette Boucher was born on 18 February 1917 in Saint-Éleuthère-de-Kamouraska. In 1934, she obtained her teaching certificate and began her career teaching in a one-room schoolhouse. In 1935, she married Benoit Rousseau and stopped teaching to raise the couple’s eight children. Following her husband’s cerebral thrombosis in 1952, the family moved to Coaticook to pursue better educational and employment opportunities. Mrs. Rousseau worked at Coaticook Penman’s Ltd. from 1952 to 1967 as a machine operator and production supervisor. During this time, she also completed courses in politics, sociology, economics, and unions. In 1960, Mrs. Rousseau helped to successfully establish a union at the Penman’s factory and served as its president. She also served as a director on a number of union and federation boards. In 1963, she became the first woman to be elected as the vice-president of the Confédération des syndicats nationaux. From 1967 to 1971, Mrs. Rousseau worked as an educational consultant. Meanwhile, she became one of the founding members of Fédération des femmes du Québec, which was heavily involved in the creation of Conseil du statut de la femme du Québec in 1973. Included among her various honours, she was awarded an honourary doctorate from the Université de Moncton in 1977. In 1979, she was appointed as a Liberal member the Senate, an office which she held until her death on 17 March 1988.