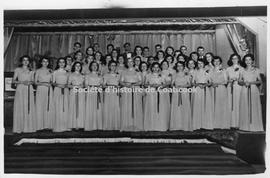 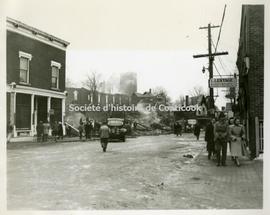 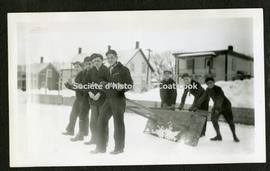 Cyprien Tanguay (1886-1986) married Delvina Couture (1897-1985) on 12 September 1916 in St. Herménégilde. Together they had at least two childred: Jeannette (1916-1989), Lucien-Paul (b. 1923). In 1927, Cyprien opened a grocery store on Cutting Street in Coaticook. The store, though not as large as that of D.S. Bachand on Main Street, was particularly popular with the children who attended school on Pleasant Street (presently Gérin-Lajoie), who came in to buy penny candy.

Fonds presents information on the religious history of Coaticook and the musical interests of Jeannette Tanguay from about the 1910s to 1989. It consists largely of song lyrics, documents pertaining to musical performances, and religious items. The fonds is composed of the following series: Religious life, Music, History of the Tanguay family, and History of Coaticook and region.

The fonds was received in two accessions; one donated by Lucien Tanguay and by a second unknown donor.

Most of the documents are in French, one in English.