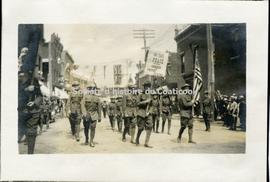 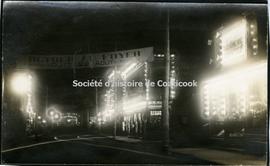 Charles Jackson Cushing, son of Manda T. Cushing and Patsy Eliza Abbott, was born in Barnston on 1 February 1850. He was educated at Barnston Academy. During his lifetime, Charles J. Cushing served as mayor, school commissioner, and Justice of the Peace. He married Amelia Carr on 17 June 1885. Following Amelia Carr’s death in June 1915, he married Emily A. Hadlock in October 1915. Among Charles J. Cushing’s nieces and nephews were Abbott Jenks and Emily Cushing Sheldon. Heber Cushing Peters, son of Alexander Peters and Sarah Elizabeth Cushing Haselton, was another relative. Charles J. Cushing spent his life on the family homestead and passed away on 19 April 1931.

Fonds presents information on the Cushing family and Old Home Week in Coaticook from 1914 to about 1994. It consists of correspondence from Heber Cushing Peters to Charles and Emily Cushing, a letter to Abbott Jenks regarding the Barnston Corner Baptist Church, photographs of Old Home Week in Coaticook, and a biographical sketch of Heber Cushing Peters.

Two of the letters are photocopies.