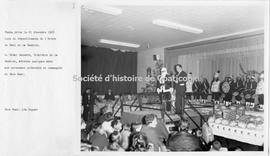 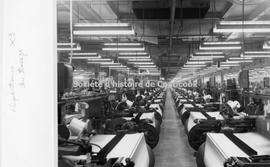 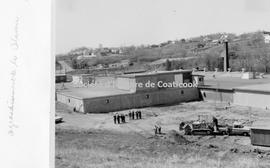 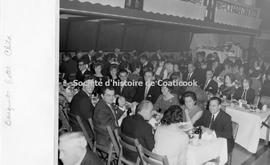 The Coaticook factory that would eventually become the Canadian Celanese had its earliest beginnings in 1872 with the purchase of water rights from Levi Baldwin to Thomas McDuffee. They would then be acquired by Frederick Cross for the establishment of a rake factory. The factory went through a series of changes in ownership and purpose until it was acquired by Trenholme and Armitage in 1889 and became the Coaticook Woolen Mills. The factory was destroyed by fire in June 1889 and was rebuilt, continuing operations until 1919 when it was sold to Walter Blue. The factory again underwent multiple transactions until 1944, when it was acquired by Coaticook Textiles Limited. Under this ownership, the factory was expanded and by 1954 it employed 125 workers.

The Canadian Celanese was established in Coaticook in 1956 with the purchase of Coaticook Textiles Ltd’s building and equipment. In 1963, the Canadian Celanese Company merged with the Canadian Chemical Company to become a division of Chemcell Limited. In 1972, its corporate name was changed again to Celanese Canada. In 1980, the principal activity of the Celanese was the manufacture of acetate lining and texturized polyester fabrics. At this time, 80 per cent of their production went to Drummondville for dying and dressing.

In 1984 and 1985, Canadian Celanese’s plant in Coaticook was purchased by Produits Cellulaires Waterville. The company subsequently closed the plant, transferring Coaticook employees to Waterville.

Fonds presents information on the Canadian Celanese factory in Coaticook, particularly on the employees and the process of the factory’s closure, from 1956 to 2005. It consists of mainly of correspondence, employee lists, collective agreements, press clippings, and reproduced photographs. The fonds is composed of the following series: Le Syndicat des salariés de Celanese de Coaticook, Human resources, Closure of the Celanese, Procedures, Reunion of employees of the Coaticook Celanese, and History.

Most of the documents are in French, a few are in English.