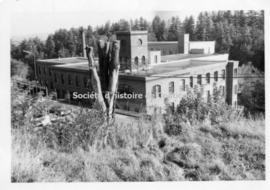 The Belding-Corticelli factory in Coaticook had its beginnings with John Thorton and Edwin F. Tomkins in 1883 when they purchased the weaving equipment from the Coaticook Cotton Company. This company, called Cascade Narrow Fabric, was purchased by Corticelli Silk Company in 1898, and factory was expanded with the construction of a second building adjoining the original structure. With the merger between Belding Paul & Company and the Corticelli Silk Co., it became the Belding Corticelli Ltd in 1915 or 1919. With the expansion of its facilities and equipment, Belding Corticelli employed 200 to 300 workers from early 1900s into the latter half of the century. The factory added a second building to its original property on Child Street in 1946 when it purchased the A.O. Norton building on Cutting Street. For many years, the factory primarily manufactured braid (also known as woven tapes), elastics, laces, and cotton cord. Belding Corticelli Ltd closed its doors in 2004, stating that it was no longer able to compete with the expanding availability of Chinese-manufactured products.

Fonds illustrates the operations, personnel, municipal relations, and the properties of the Belding-Corticelli factories in Coaticook from 1945 to 2001. It consists largely of correspondence, photographs, and collective agreements. The fonds is composed of the following series: Personnel, Correspondence, Photographs, Production, and History.

The majority of the collection was received from an unknown donor. Additional material was donated by Martial Martineau and Sandra Samson Pelletier.