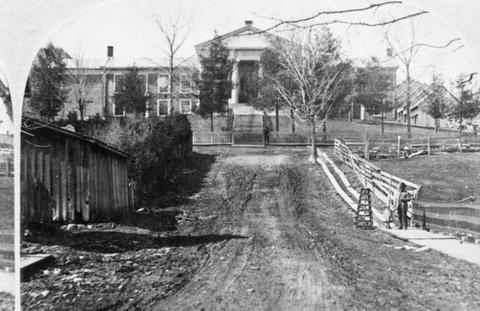 Item is a photograph of a road and wooden sidewalk that lead to the second Sherbrooke Court House (Palais du justice), built 1839-1841 and used until 1904, which is visible in the background. The building was given to the 53rd Sherbrooke Regiment in 1912 to serve as their armoury and later on became the armoury for the Sherbrooke Hussars.

A thumbnail version of the photograph is available for consultation in the Old Library.

Title based on contents of item.
Original negative no. 79-34-7A.