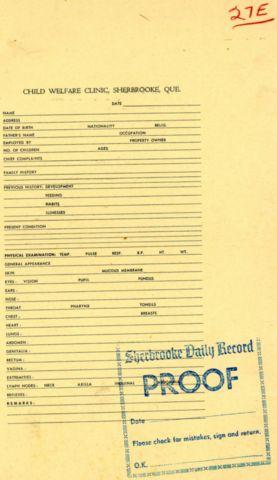 The Child Welfare Clinic of Sherbrooke was formed on January 26, 1920 during a meeting of representatives from the Canadian Patriotic fund, which was the Sherbrooke Branch of the Red Cross, but was not incorporated until 1923. When first established, the members described the association's purpose as to provide a free clinic for children of ex-soldiers, soldiers, ex-sailors, sailors, and parents too poor to provide medical care. Later on, they expanded their mandate to give full medical, surgical, and hospital service to the very poor of the city of Sherbrooke and the Eastern Townships. In the beginning, the Child Welfare Clinic held weekly clinics in Sherbrooke where parents could bring their children to receive care, which included glasses, dentistry, and operations. As the needs of those in the region changed, the organization ended the weekly clinics in favour of having needy children sent to them by school nurses. By the 1960s and 1970s, much of their efforts had been put into organising large dental clinics in the summer for different regions and supplying milk and vitamins to children through the schools. The Child Welfare Clinic was dissolved in 1992.

Title based on contents of fonds.
The documents were donated by Marguerite Cotton in 2004.
Most of the documents are in English, some in French.