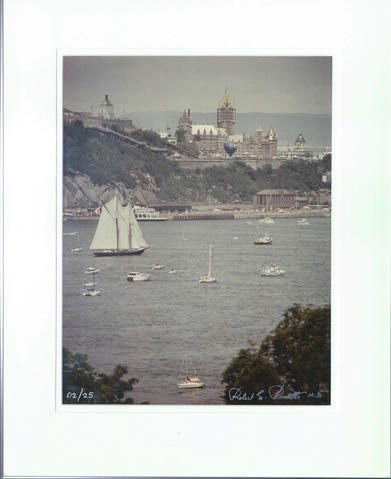 Dr. Robert Paulette was born in Sherbrooke in 1930. He graduated from Sherbrooke High School and was awarded a McConnell Scholarship to study at McGill, where he obtained and B.Sc. degree and an M.D. He then proceeded to United States after a year's internship in Montréal to pursue postgraduate studies in general and thoracic surgery. In New York he studied at the NYU Bellevue Medical Center as well as at Columbia Presbyterian Medical Centre. In 1961, he joined the staff at Sherbrooke Hospital, where he became Chief of Surgery.
Dr. Paulette's interest in photography goes back as far as his teenage years, when he was given the gift of a camera from a solider after World War II. He died on March 21, 2020 after a short battle with cancer in Calgary, Alberta.
Sources: Excerpted from Dr. Paulette Resumé by Galerie Robert Senneville
"Obituary: Robert Edwin Paulette," McInnis & Holloway Funeral Homes, accessed April 29, 2020, https://mhfh.com/tribute/details/30482/Robert-PAULETTE/obituary.html.