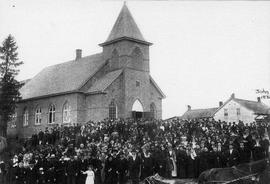 The fonds contains source material on the history and congregation's affairs of the Presbyterian church in Gould, known first as Chalmers Presbyterian Church (1845-1925) and then as Emanuel Presbyterian Church (1925-1949). It consists of minutes, annual reports, orders of service, a communion roll, a newspaper clipping, and a register of baptisms, marriages and burials. The fonds is comprised of the following series: Vital Statistics (1931-1946), Session (1931-1949), Congregation (1897-1928), Photographs (1920), and Miscellaneous Documents ([190-?]-[192-?]).

The register of baptisms, marriages, and burials may be restricted at the discretion of the Archivist.