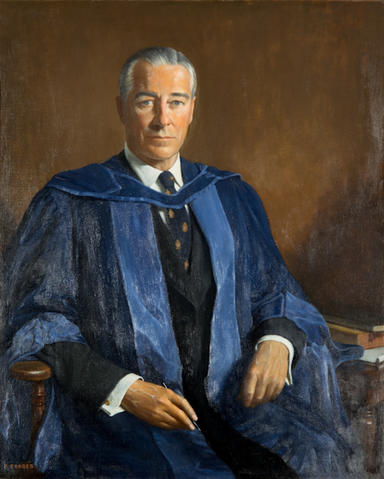 Kenneth Keith Forbes was born in 1869 in Toronto, Ontario. He studied at the Newlyn School in the United Kingdom where he won a four-year scholarship to the Hospitalfield House school, Arbroath, Scotland. He won a Chase Scholarship in London with a portrait sketch, he attended the Slade School of Fine Art. By the young age of nineteen he had a portrait exhibited at the Royal Academy. He became a master of realism and used oil paint.
Forbes had been in military service. He served with the 10th Battalion, Royal Fusiliers. In 1917 Forbes received a commission by Lord Beaverbrook (Max Aitken) to paint a series of official war pictures of the front.
In the late 1950's Forbes resigned from both the Ontario Society of Artists and The Royal Canadian Academy due to personal displeasures with the groups, he was not fond of the popularity and recognition of the more abstract modern art that was being produced. He published a short book, "Great Art to the Grotesque", as a full statement of his rejection of the artistic worth of abstract or what was considered Modern Art.
In 1958, Forbes, Manley MacDonald, Victor Llewellyn Child, Gordon Roy Conn and others established the Ontario Institute of Painters, a group that supported traditional realist artists. Members included Douglas Ferguson Elliott, J. R. Tate, and Marion Long.
Forbes was awarded the Thomas R. Proctor Prize for portraiture by the National Academy of Design, New York in 1932 and 1939. In 1967, he was made an Officer of the Order of Canada. He is still recognized as an academician of The Royal Canadian Academy.
His works are held by The Canadian War Museum and The House of Commons in Ottawa, Ontario among other institutions.
Forbes died in Toronto on February 25, 1980.
Source: Q Gallery http://www.galerie-q.com/canadian-masters/kenneth-keith-forbes.html?tmpl=component&print=1