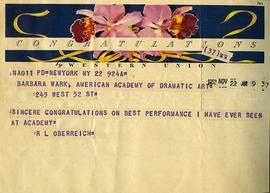 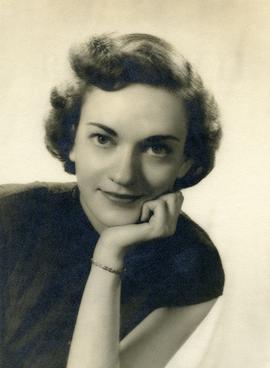 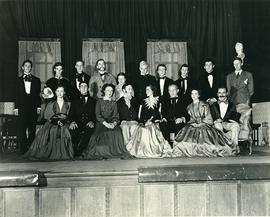 Barbara Wark, daughther of James Wark (1897-1969) and Florence Bryant (1901-1993), was born in Sherbrooke in 1930. Barbara continued to pursue her passion for the arts following her graduation from Bishop’s University in 1950. She briefly attended the Sherbrooke school of ballet before, in 1952, applying to and being accepted by the American Academy of Dramatic Arts in New York City. Her artistic pursuits in New York City led her to remain involved in local theatre spheres upon her graduation and was part of plays presented at The Piggery Theatre and at St. Peter’s Anglican Young People’s Association. By the late 1950s Barbara had shifted her focus from her artistic pursuits towards her career. Barbara worked as a reporter with the Sherbrooke Daily Record and the Toronto Telegram. Barbara was later married in 1970 to Martin Larry Drexel, this marriage would bring her to resettle in Camrose Alberta, where she would stay until Drexel’s death in 1999.1 Following her husband’s death, Barbara returned to Sherbrooke where she lived with her sister Catherine. It was during this time that Barbara cemented her legacy as a community member, picking up where her mother had left off as the organist for the Church of the Advent.2 Moreover, Barbara played an active roll in community outreach programs through her involvement with the Mental Health Estrie, an organization dedicated to providing mental health services and support in English in the greater Sherbrooke area.

This series contains primary source material on the professional, theatrical, and educational life of Barbara Wark in Sherbrooke and New York City between 1947 and 2002. It consists primarily of photographs and theatre programmes. The series is comprised of the following files: Professional life, Theatre, and Education.