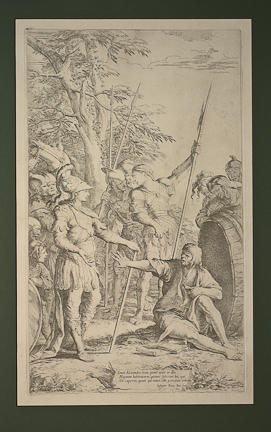 Rosa was an Italian painter of the Baroque period, as well as a print-maker, poet and author of satires. He was active in Naples, Rome and Florence, and best known for his unconventional and romantic landscapes, as well as his rebellious nature. Rosa was indisputably a leader in that tendency towards the romantic and picturesque, called a proto-romantic. His landscapes avoided the idyllic and pastoral calm in the landscapes of Claude Lorrain (1600 – 1682) and Paul Bril (1554 – 1626), and created brooding, melancholic fantasies, awash in ruins and brigands. As a writer, Rosa was equally romantic in his descriptions and rebellious in his attitude towards convention.
Rosa began his training in Naples, notably with his future brother-in-law, Francesco Francanzano (1612 – 1657), who trained under the influential Spanish painter, Jusepe de Ribera (1591 – 1652), who Rosa may have trained with as well. It is also said that Rosa may have trained with the Naples painter, Aniello Falcone (1600 – 1665), who was also an apprentice to Ribera. After a brief trip to Rome, he returned to Naples and began painting his wildly romantic landscapes, eventually returning to Rome after 1638 painting one of his only altarpieces, Incredulity of Thomas.
Source Virtual Uffizi https://www.virtualuffizi.com/salvator-rosa.html