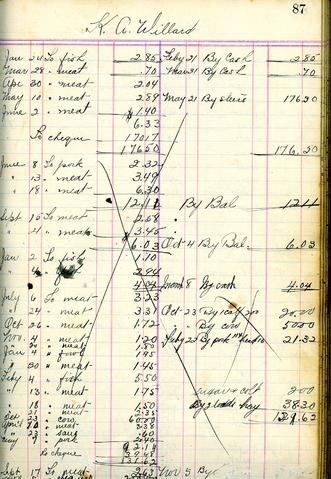 Leeman Mackey (baptized with family name of Mackay) was born on 3 October 1883 to William Mackay and Jemima Rice in Weedon, Quebec. By 1911, Leeman had moved to Marbleton and appears to have been an apprentice under Alvin Barter, a butcher. Leeman Mackey was butcher in Marbleton. He took over Alvin Barter’s butcher business around 1916 and was the first butcher to go from village to village with a cart. Leeman married Dora Mackay in 1912 and together they had one child, Lloyd Allen, born in 1913. They also had a daughter, Una, who died in 1920. He died on 27 September 1966 and is buried at the Lakeside Cemetery in Bishopton.

The documents were donated in 1999.

A classification plan is available.

Digital object shows a page from Leeman Mackey's account register for K.A. Willard from about 1919.