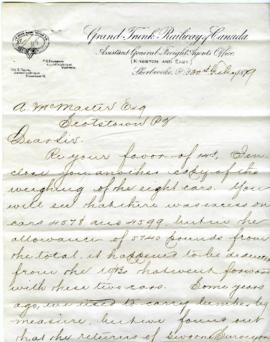 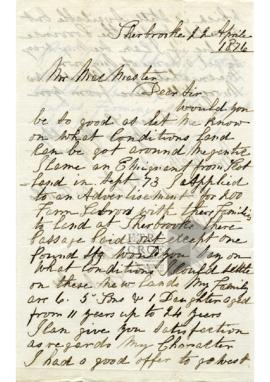 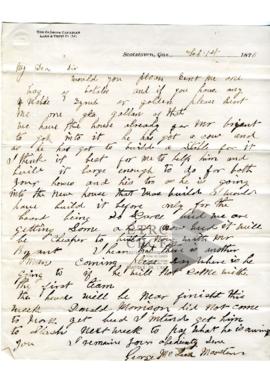 Aeneas McMaster married Elisabeth MacIndoe on 4 July 1854 in Barony, Lanark, Scotland and emigrated to Canada in 1874. In 1875, Aeneas McMaster was appointed Director of the Glasgow Canadian Land and Trust Company, a private settlement and forest development company operating in Clinton, Hampden, Ditton, and Marston townships in Compton County, among other places. In 1876, McMaster was Mayor of the Municipality of Hampden, which had been formed in 1874 and comprised Hampden Township and the town of Scotstown. The same year, he became a member of the board of directors of the Compton County Agricultural Society No. 2.

The fonds contains source material mainly on railway development and settlement in Clinton, Hampden, Ditton, and Marston townships in Compton County and around Lake Megantic from 1873 to 1888 and on the role of the Glasgow Canadian Land and Trust Company, managed at the time by Aeneas McMaster. The fonds consists of letters sent to McMaster from 1873 to 1888 by businessmen and shopkeepers, municipal councillors or mayors, employees of the Glasgow Canadian Land and Trust Company, men in search of work, and settlers and includes a proposal for building a mill; letters signed by McMaster; and a few other documents. The fonds is comprised of the following series: Railway Companies (1876-1888), Settlement (1873-1876), Municipal Affairs (1873-1881), Miscellaneous Documents (1875-1881) and Correspondance (1876-1882).

Formerly known as the McMaster Papers.
Title based on contents of fonds.
Some documents have been put in polyester sleeves.
The documents were purchased in 1989.
The documents are in English, a few are in French.